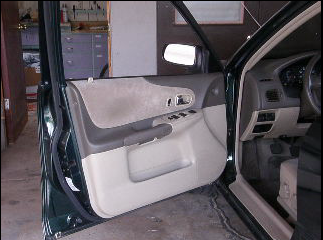 One problem I’ve had with my Mazda Protege is that Mazda decided to use cheap plastic in their design for automatic door locks, door handles and window regulators. In fact, I’ve had to replace the driver side, front window regulator twice, the driver side, rear locking mechanism twice, the passenger side, rear locking mechanism once and the driver’s side, front interior door handle once. Perhaps it’s not so much cheap as it is poor engineering after all Southern Arizona does average over 100° for several months in the summer – not a good complement to plastic.

Whatever the reason, when the driver’s side window regulator went out again on my 2003 Mazda Protege I was faced with a decision:

After weighing the cost in wasted time with the dealer and the remaining length of my extended warranty I decided to do it myself. I figured I’d be repairing the windows again in a few years so might as well learn how now; I’ve already had to have the dealer fix two power locks and three power window regulators on this vehicle.

The first step was to get the part. I was impatient, so I way overpaid by picking up the power window regulator from the dealer. Ironically just purchasing the part from the parts counter took over an hour. It was also shocking to see that for $160 the window regulator didn’t even come with a motor!

If I had been a bit more patient, I could have ordered the replacement power window regulator with motor for my 2003 Mazda Protege from Amazon for a little as $62 but the idea of driving around Tucson without being able to roll up or even close my driver’s side window wasn’t an appealing proposition.

This tutorial is for the 2003 Mazda Protege driver’s side, front Power Window Regulator. The Passenger side is similar, but this tutorial will be more or less useless for the rear doors.

*Disclaimer – This tutorial is for general informational purposes; you break your door, it’s your own fault.

Step 1 – The most obvious, open your Protege’s door. There is no need to disconnect the battery cables but you may want to turn off the cabin lights if they are set to turn on when doors are opened. Chances are the replacement of the Power Window Regulator won’t last long enough to drain the battery. It took me about an hour because I had to mount the old motor onto the new regulator.

Step 2 – Remove the plastic button clip on the door jamb. Gently pull out the center of the clip with your fingernails or other soft, thin object. Once the head comes forward, the clip will pull right out. 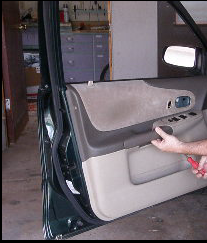 Step 3 – Remove the screw located under the door handle on the right front side with a medium sized Phillips Head Screw Driver. 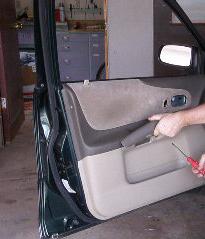 Step 4 – Gently twist the handle up and to the left (right if passenger side door), and it will pop loose. 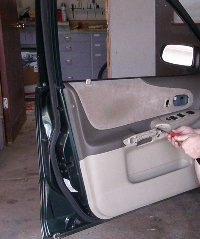 Step 5 – Remove the two Phillips Head screws located in the holes revealed when the door handle was removed. 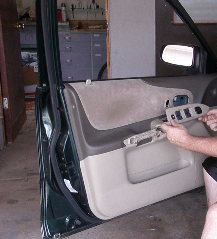 Step 6 – Remove the power accessory switch console. Gently pry the broad end of the console loose with a soft flat object so as not to damage the surface of the door cover or console. 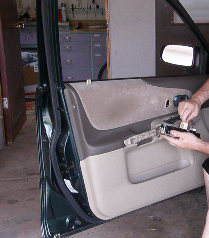 Step 7 – Remove the wiring clips from the switch console by pressing in the plastic clip locks and pulling away from the console. 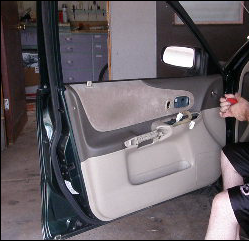 Step 8 – Remove the plastic button clip on the top, inside right of the door. Gently pull out the center of the clip with your fingernails or other soft, thin object. Once the head comes forward, the clip will pull right out. 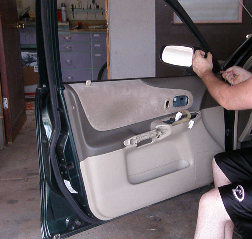 Step 9 – Gently remove the black plastic triangle from the top right corner of the door, opposite the rearview mirror, by pulling from the front point towards the door jamb. 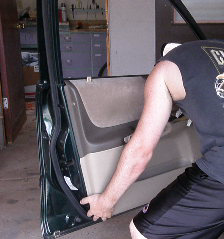 Step 10 – Remove the door panel by gripping the bottom and firmly, but gently pulling upward until it pops loose. Then pull out from the bottom and lift the panel away.

Update thanks to Russ’ Comment below: When removing the door panel, it is paramount to carefully detach the plastic retaining clip that attaches the metal rod to the door handle. 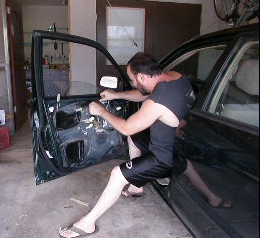 Step 12 -Remove the plastic weather guard carefully so it can be reused. Be careful not to get the sticky black adhesive on your upholstery. 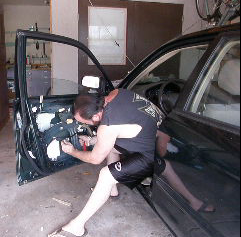 Step 13 – Gently remove screws holding the window to regulator slider arm attached to the base of the window. 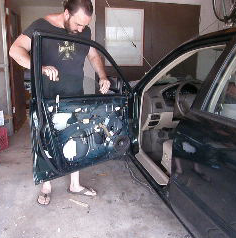 Step 14 – Grasp window and pull upward, then outward and gently remove from the door frame. 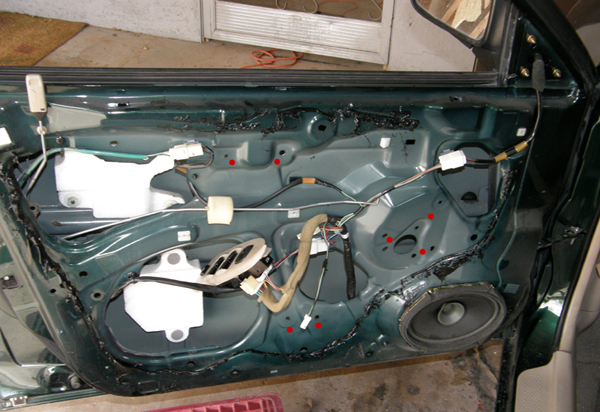 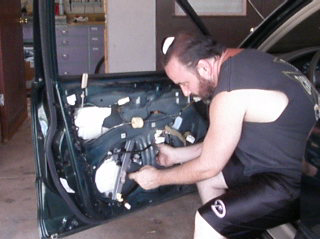 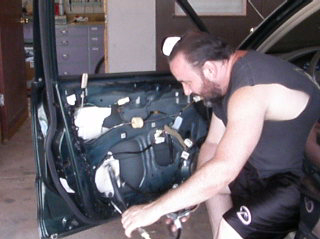 Step 17 – Guide the regulator assembly towards the large hole in the door on the bottom left (bottom right on passenger side door).

If your new regulator comes from the dealer, you will need to mount your existing motor on to the new Power Window Regulator. 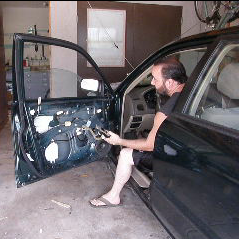 Then reattach the switch console and test the window prior to doing steps 12-1 in reverse. And that’s all there is to changing a 2003 Mazda Protege Power Window Regulator. 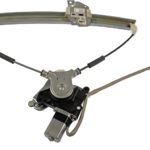 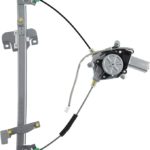 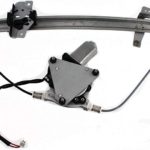